Yes, we still have good lambs for sale!

These are all sold, but I am keeping this here just for fun! 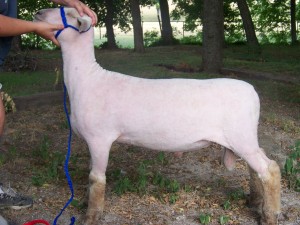 … But not this one.  One of our buyers sent this pic of “Rocket,” a ram lamb she bought from us. What a handsome boy! The funny thing about him is, he is off our Ballard ewe “Big Momma.”  The other twin showed much more promise early — we called him “Big Boy” — and called this one “Wrinkly Guy,” because he was just a wrinkly little guy.  I guess he didn’t get the best teat or something.

When he was still in his scrawny phase, the breeder of our ram stopped by for a visit and he picked Wrinkly Guy out right away and said he liked him. I said, “Oh but he’s so wrinkly!”  Sure enough, he grew into his wrinkles and a young woman came over and picked him out right away. That shows what I know.

We have some nice wethers left for show or for lawnmowers. In order to prevent an extreme population explosion, I need to sell two more ewe lambs but I am not sure which ones they will be yet.  My experienced shepherdess friend will help me pick out two (and one alternate) to show at the North Texas State Fair.

Yes, the Open Breeding Sheep show in Denton is back! They dropped it last year but due to popular demand they brought it back for 2010. In fact since I was one of the people who complained, they put me on the committee.  I don’t know anything about sheep shows, but having done dog shows for 14 years I guess I can contribute something!
The Open Sheep show arrival will be Thursday, August 26th, 2010
The show is scheduled for Friday, August 27th, 2010 @ 10 A.M. I will post more information when it’s available – also see http://ntfair.com/ 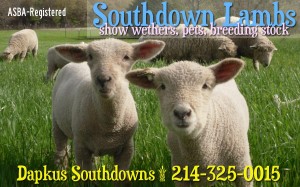 I encourage as many people as possible to come out — it’s good practice right before the State Fair, and you cannot beat the convenient location if you are close to the DFW area or Southern Oklahoma (OK animals are allowed to show!).  I suggest registering ASAP but if you forget, please come anyway as they will let people register on-site.
So please come out! You’ll see me, my ewe lambs and my best yearling, Malia, and you’ll probably see Wrinkly Guy — now known as “Rocket.”

If we don’t support breeding shows and only breed for wethers, I believe our breeds miss out.