What happens when most of your ewes get bred in one week?

Home / What happens when most of your ewes get bred in one week? 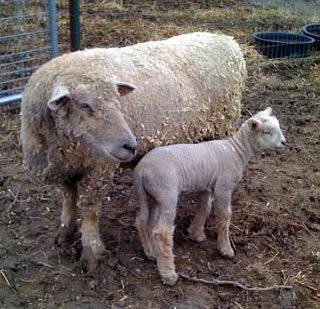 A little future Champion at just one week old

This year I tracked every time Mr. Seven marked the ewes on my Excel spreadsheet.  The idea is to put paint on his chest, and it leaves a mark on the ewe’s rump when they get busy.  The shepherd notes the date and waits for the lamb to arrive 150 days later.

I was told that once a ram has bred all the ewes, he sits around acting bored because the ewes won’t let him near them. So I was very disappointed when I saw him mark them once, twice, three times. I resolved to accept whatever I got because it was too late to change rams.

Then I noticed ewes bagging up much too early to have late-March or April due dates. I started backing up delivery dates to previous markings.

Then last week, the babies started coming. And coming. And coming. Two first-timers went into labor at the same time. With twins.  At least they had the courtesy to do it in the morning. It seems like everyone else decided to have babies between 10PM and 3 AM. I pulled three all-nighters in a row.

Not only was Mr. Seven overly enthusiastic, he was prolific. All but pretty Nigella, who always has one beautiful lamb, had twins. Most were born within a week. I guess the other weeks of mating behavior was just for fun. 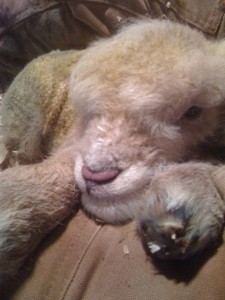 Nigella had another ewe lamb this year, who I named Niecy.

Shepherds like tight lambing groups because it makes it convenient to perform scheduled tasks like tail docking, castrating, worming, vaccinations and weaning. I may be losing sleep now, but it will be great to get the weaning screaming over with all at once. However, we didn’t have enough jugs ready to have so many lamb at the same time, and I need to watch very carefully for disease outbreaks that tend to affect lambs of particular ages.

The problem with having so many small lambs underfoot is that mothers, babies and the shepherd are all confused. For the first time I had to mark them to tell them apart.

Teddi, who is an excellent mother, became distracted by the chirping of the other lambs during her own labor.  I think her labor also happened unusually fast, so that the usual scent imprinting of the birthing spot did not happen.  She dropped her lamb and then ran around the barn bellowing, “Where the Hell is my baby?!?”  Meanwhile, the baby was flapping around in a puddle, crying. Eventually she went into a corner where I could isolate her and present her with the lamb. She sniffed him with suspicion, then accepted him and later his twin sister.