This September, Don and I participated in a 10-day sheep tour of Ireland, sponsored by Premier One Supplies, a livestock supply company (their catalog is one of the few worth getting in print – ask for it!).

I cannot say enough about the beauty of the country, the warmth of the people and of course, the cuisine. These are my kind of people — into butter (one of their major exports), sausage and brown bread. Deliciousness! However, this is a sheep blog so I am going to sum up my impressions of shepherding in Ireland. Our trip took us along the Northern part of Ireland — starting in Shannon/Limerick, through Belfast and ending in Dublin. It’s hilly, rocky country where sheep and cattle graze in stiff winds practically right into to the Atlantic ocean. 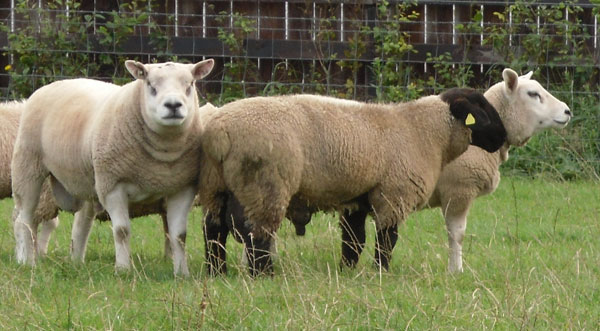 American Lamb: Meatless Wonders? The main thing that hit us was how different their sheep look.  Some on the tour wondered if the American Suffolk has become a “meatless wonder” by comparison. Irish meat breeds have long bodies, but are wider and have shorter legs.  Irish livestock shows and sales do not reward a tall, tubular lamb but rather a short and meaty lamb. We visited a sheep exhibit at a the National Ploughing Championships, a massive livestock show, and all of the sheep breeds exhibited were shorter and stockier than their American cousins.

Safe and Clean Flocks. Then we asked, “Where is the hay, where are the sheds, where are the LGDs and why the heck are these sheep so clean?”  Irish sheep live in paddocks with centuries-old low stone fences, reinforced with electric or high tensile fencing, with no shelter. There is no mud, brush or hay (unless absolutely necessary) to sully their fleeces, so the sheep are much cleaner than ours. It amazed me that they exist on a diet with no “scratch factor” in the form of hay or brush. Although we noticed a few poopy bottoms (they dock tails long, if at all), their systems are used to a completely grass-fed diet (thanks to up to 10 FEET of rain annually). Cattle are kept in the same manner.

During lambing season, the ewes come into nice, well-ventilated lambing barns with slatted concrete floors and are fed hay or silage made of corn or hay. Because of the wet weather, harvesting and keeping dry hay as we do is extremely difficult, so hay is fed only when absolutely necessary.  The farms store silage in large black plastic rolls next to the barn. 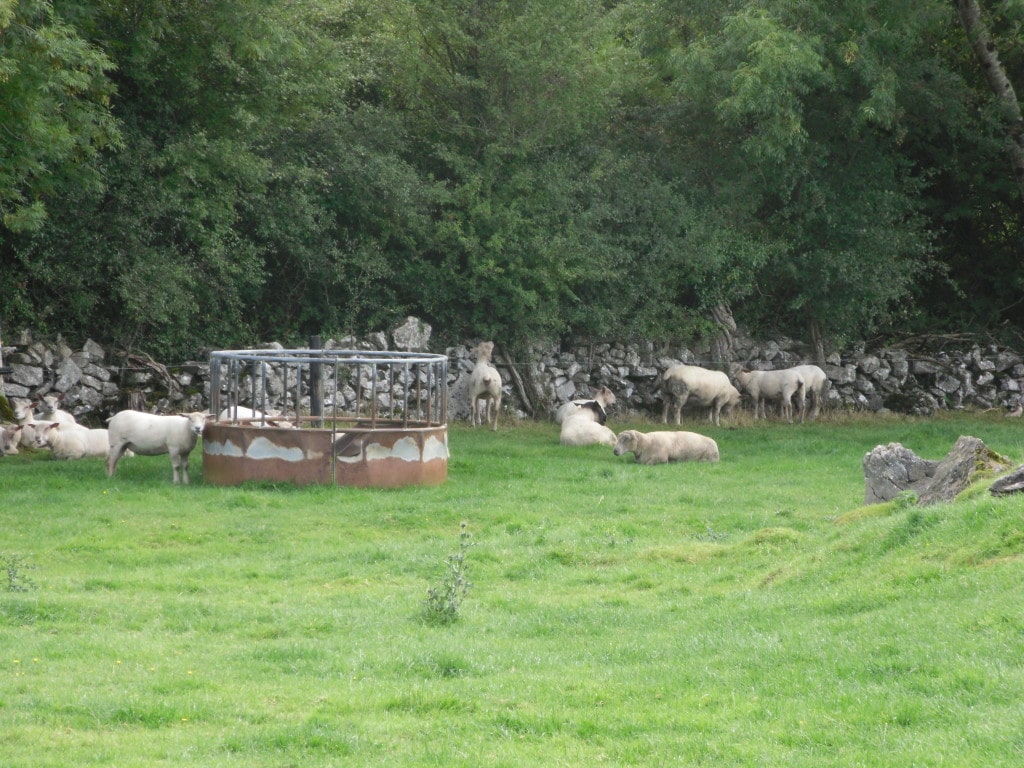 Typical “dry” stone fencing (no mortar), with hedge or trees. These are Charollais or Charollais cross.

Ireland has no predators other than the fox, which only bother very small lambs, and domestic dogs. There are no coyotes, wolves or cats, which is why the fences are so low. We saw no livestock guardian dogs, llamas or donkeys out with the sheep. 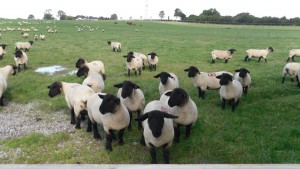 Oh and another thing we didn’t expect to see: BALLS. Farmers normally send bull calves and ram lambs to market. The growers prefer not to castrate because the animals grow more quickly. Processors don’t assess a penalty and consumers don’t complain about the taste because intact animals are the norm. Lambs are typically processed for a 50 lb. carcass, and the largest export market for Irish lamb is France. 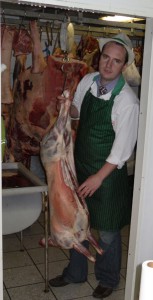 Speaking of Meat: While on a potty break, we stumbled upon a real old-fashioned butcher shop. The butcher generously invited us in to take photos and answered our questions. I guess he went home that night and told his family that a tour bus full of Americans invaded his shop.

Wool is just an inconvenience. The farmers told us that the price they get for wool pays for the cost of removing it and no more. Indeed, all the displays we saw at the fair talked about meat qualities rather than wool. We saw no hair sheep, presumably due to the climate. We saw a couple of goats on the trip — they are becoming popular for dairy —  but goats, llamas and alpacas are a minority.

The  Mighty Mountain Sheep. In the part of Ireland we visited, the industry is composed of  hill sheep and lowland sheep. The little hardy hill sheep are called Scottish Blackface or Mountain Blackface. They live where grass is relatively poor and navigate steep hills much like our native desert sheep do.  While humans find their damp and windy habitat extremely uncomfortable (are there any pictures of me from this trip where my face is not obscured by a hood and scarf?), the sheep only get wet down to about 1″ of their fleece.  Dogs bring them down to the lambing paddocks in early spring, where they lamb on average only about .9-1 lamb per ewe. 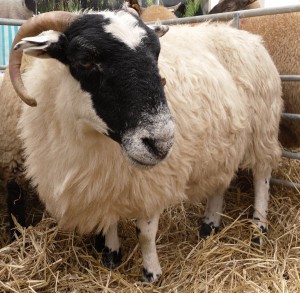 A Scottish or Mountain Blackface mixed with Suffolk

Farmers may cross blackface ewes with Suffolk or Bluefaced Leicester rams, and keep these ewes in the low areas where the grass is better. Lowland ewes and their progeny (Scotch Blackface + Blue Leicester is called a Scotch Mule sheep) have more twins than the mountain ewes do.  The Bluefaced Leicester is a very striking sheep and one of the few breeds we saw with long legs similar to American breeds. 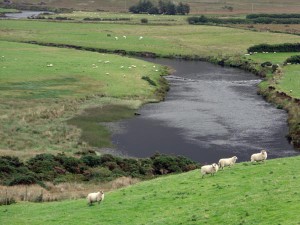 Texel$! One of the more popular pure breeds in Ireland is the Texel. A Texel ram in Scotland broke the record (over $300K USD) most expensive sheep ever sold. We didn’t get to see him, but we did see some Texel rams that cost thousands of dollars. 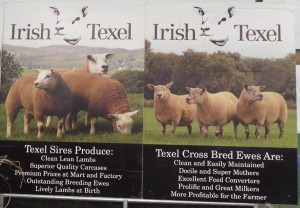 Display at the Irish Texel booth

The Texel is popular both for bloodstock and for crossing into other breeds to increase profitability. They are meaty, solid and very wide in the back.

Most of the farms we visited kept 150-300’ish ewes (most also kept cattle). As it has been since biblical times, shepherding is a tough way to make a living.

A sheep research station shared detailed financial records with us, and it was apparent that even given 10 months or more a year of free grass to eat, without the government subsidy, farmers selling lamb solely as a commodity lose money on every ewe.  Prices are dominated by a few large buyers.  As a result, some breeders have been relying on selling breeding stock to  make a living (or have other jobs in town). Even though agriculture has a much higher profile in Ireland than in America, it’s difficult to get young people started because the cost of land is so high and profits so low. Farm acreage is as costly as our suburban land in Texas. 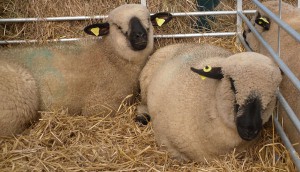 To encourage land conservation, the government recently changed the subsidy to be based on acreage rather than on a per-head basis. This change, and because dairying has become more profitable, caused the number of sheep raised in Ireland to plummet. However, lamb prices are up because the supply is in better balance with demand.

While we envied the Irish shepherds’ freedom from predators and bounty of thick green grass, the Irish envy the freedom from governmental interference that American farmers enjoy.  Because of fears of a major disease outbreak, farmers are struggling with strict reporting requirements. If a sheep dies, the farmer may not bury it or drag it out to the bone pile. A vet must be called and a death certificate issued, then the farmer must pay about $75 to have the carcass disposed of. A farmer who cannot account for all of his stock will be penalized.  Also, new electronic tags are required and these are adding complexity and causing some ear infections.

I’ve come back from the trip wanting more grass, a nicer barn with a concrete floor, and meatier animals (it would be nice if they stayed clean, too). Oh and also some of the neat handling equipment we saw at the Ploughing Competition — the livestock show had more sheep equipment on display than I have ever seen.  AND I want to get into Zwartbles (see below)! 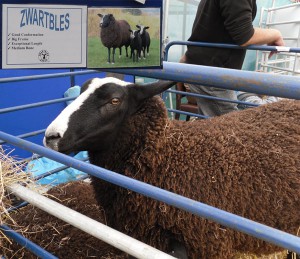 In Ireland, grass-fed meat is not a trend, it’s been a way of life for centuries. I’d like to keep decreasing our reliance on grass. This is why we got Southdowns in the first place, but I didn’t realize how poor our soil was when we got the sheep. Reducing numbers and dividing the pasture has helped. Southdowns are made for challenging environments, and while our weather and soil will never allow us to manage our sheep like the Irish do, I have returned from our trip inspired to do better.

At the National Ploughing Championships — sheep have a higher profile than in America but who will take over from the current generation?